Joe Allen lives! Lights up at theatreland favourite as it reopens with help from Russell Norman

Joe Allen lives! Lights up at theatreland favourite as it reopens with help from Russell Norman

Norman will be in charge of “the bar I always wanted to find in London but never could”, while chef Gary Lee is looking after the food

The show will go on at enduring theatreland favourite Joe Allen, which has announced its plans to reopen after more than 18 months shut.

The restaurant, which is famed for its glitzy crowd of showbiz regulars, has remained closed since the pandemic took hold in March of last year. It will open for a soft relaunch from September 17, before getting going in earnest from October 15.

It will not entirely be business as before for the spot, which has remained more-or-less the same since it first made in a splash in Covent Garden in 1977 – albeit with the interruption of a “brick-by-brick” move from its original home in Exeter Street to its present home on Burleigh Street back in 2017.

There is change in the kitchen, with Gary Lee now executive chef; Lee is best known for his 17-year stint as executive head chef of the original Ivy on West Street. The chef will look after the restaurant’s stalwart dishes, among them a secret-but-not-really burger that’s always off-menu and a classic Caesar salad, as well as their quintessential American puddings, which include a pumpkin pie brûlée, New York cheesecake and an apple tart with pecan pie ice cream.

Lee is also set to introduce a handful of new dishes, including a Portland crab and sweetcorn soup; duck with watermelon and cashews; and brick-flattened chicken topped with black eye bean salsa and accompanied by corn muffin, chicken gravy and plantain crisps. 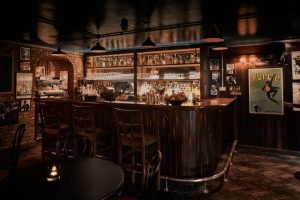 Lee said of his appointment: “I am so happy to be joining such a creative, fun team of people as exec chef of Joe Allen, a place where I spent many nights after work tucking into a burger or two. Being the well loved institution that it is, it’s a fantastic challenge and I am looking forward to putting my mark on some of the dishes – a modern approach to brasserie food. Joe’s has always been a place for people to just go and sit, eat, chat and enjoy the ambiance; it’s a space where friends meet friends. Long may that continue.”

The other big news for the “West End canteen” is the appointment of Russell Norman – or rather, the re-appointment. Norman began his career in restaurants at Joe Allen, working there from 1989 for a decade, first as waiter, then bartender, maître d’ and finally manager; now, some 22 years later, he is returning to oversee a brand new addition to the restaurant, Joe’s Bar.

Norman’s cocktail menu is being described as “creative but traditional”, and will include a revival of some old-world recipes, including the Jerry Thomas Manhattan, the recipe for which dates back to the late 1800s; Thomas, sometimes nicknamed “the Professor”, is regarded as the Godfather of American-style cocktails.

Besides the Manhattan, Norman is promising “bone-dry gin Martinis, perfect Negronis” – the drink he helped popularise in London with his Polpo restaurants – and “the legendary Joe Allen margarita.” To go alongside the drinks, there will be a choice of bar snacks, including potato cigars served with blue cheese, parmesan and Marmite cheese straws, toasts topped with steak tartare and the truffled egg toast that Norman had a hit with at the now-closed Spuntino. 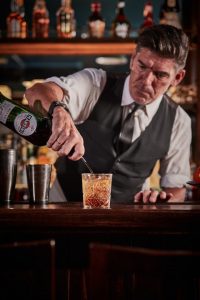 Norman said of the new project – which he will look after as he opens his new restaurant, Trattoria Brutto – that: “Joe’s Bar at Joe Allen is the bar I always wanted to find in London but never could. Somewhere with sexy lighting, effortless style, friendly service, live piano and great classic and revival cocktails.

“It’s the place to go for a pre-theatre dish or two and a Jerry Thomas Manhattan, or to kick back over a few Martinis and great bar snacks with friends for an indulgent evening. It’s only taken 45 years but finally it’s here.”

Speaking to the Standard, Norman added that he was excited for the relaunch, calling the restaurant “such an icon in the history of London dining.”

He added: “It’s always exciting when an institution is revived and Joe Allen surely has to be one of the most influential and important London restaurants of the last 50 years. To be involved in the next chapter of this legendary theatreland watering hole is an honour and a delight. I worked at Joe Allen as a waiter and maitre d’ from the age of 23 to 33 and everything I know about restaurants came from this period. The revamped menu will feature some old favourites, the worst-kept secret ‘off-menu’ items, and Gary Lee’s brilliant new dishes. And the new bar is destined to become a classic in its own right. London is in for a real treat.”

The restaurant’s co-owner Lawrence Hartley, said: “We couldn’t be more thrilled. We can’t wait to see the place full again – it’s been too long. Joe Allen fans will still be able to get their hands on some of their favourite dishes – the Caesar salad, the full rack of ribs and of course the ‘off menu’ burger – but Gary’s got some some great dishes up his sleeve: the brick-flattened chicken is incredible!The last 18 months have been an incredibly hard journey, but just to be in a position to trade once again fills us with both pride and joy.”

Norman is not the only London restaurateur for whom Joe Allen has played a pivotal role in their career: in the Seventies, Jeremy King of Corbin and King was likewise maître d’, while acclaimed chef Rowley Leigh worked there before joining the Roux brothers at Le Gavroche in 1979. It also once counted Graham Norton as a waiter; his success as a restaurateur remains unclear.